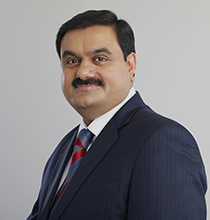 Gautam Adani is the Chairman and Founder of the Adani Group. Under his leadership, Adani Group has emerged as a global integrated infrastructure player with interest across Resources, Logistics and Energy verticals. His journey has been marked by his ambitious and entrepreneurial vision, coupled with great vigour and hard work. This has not only enabled the Group to achieve numerous milestones with speed and scale but also resulted in the creation of a robust business model which is contributing towards building sound infrastructure in India. He has been appointed as Additional Director on June 17, 2015